27 men stepped out of their comfort zones and took on the challenge of running 208 miles through the mountains of Virginia and NC.  The men of F3 Sandhills came in strong not only making one but three teams (Ultra 6-man, 9-man and an 11-man) for our second appearance in the Blue Ridge Relay. Ultra’s overall placing was 100th (31 hours, 50 min and 52 sec) and Quicksand 9 and Team Omega coming in at (34 hours, 50 min and 17 sec) We relied on our brothers through pain and lack of sleep to complete the course. 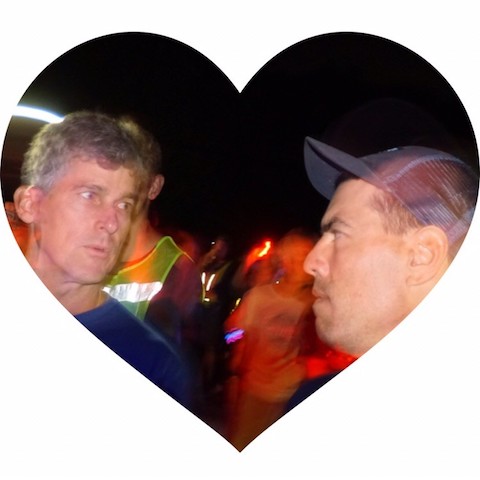 * = Ultra; Most of the Backblast surrounds the antics of the 9 and 12-man teams merely due to the fact the Ultra team was so dang fast!

Honorable Mention Pax:  Mr. and Mrs. Landry and their neighbors and MadBum’s Father-In-Law!

Warm Up:  Hammerhead provided the instructions for the warmup, which started the 4th of June.  In typical Hammerhead fashion it was low-key, straight-forward and difficult.  The warm up consisted of a total 242 miles.

The Thang:  The war stories and 2nd F opportunities were amazing. Bonds were formed in hammocks, vans, on the pavement and gravel.  You witnessed it on your brothers faces as they slapped the bracelet on that they left it all on the mountain, maximum effort given from all pax!!

Below is a list are a few of the comments and quotes shared by the PAX, I am sure there are so many more:

Therefore, since we are surrounded by so great a cloud of witnesses, let us also lay aside every weight and the sin that clings so closely, and let us run with perseverance the race that is set before us.  ~Hebrews 12:1

Well, we did it.  208 miles of up and down, heat and not-so-hot, sweat and more sweat, smiles and more smiles.  Now as we tell our stories we hear “why?” and “how?” The first question is hard, if not impossible, to answer.  If it isn’t immediately obvious why we would want to do this, then YHC probably won’t be able to explain. For most people who are “special” like us, it’s about finding your limits and pushing past them, conquering something difficult, and relishing the sheer audacity of the endeavor.  The question of “how” is a little more straightforward – just don’t stop running.

Well, for the “Why” I guess we could point to Captain, MadBum and Bourne.  After all it was through a “misplaced” or well-placed belly-pack that the weight-loss challenge was on and using the BRR for a weight loss tool made sense…..at the time.

We trained hard, pushed ourselves and some even avoided eating too many cookies.  We committed ourselves to early, early, early mornings (and put our wives and kids through the same), sore muscles and feet.  We were IN.

Many of us would never have finished this race without friends, true friends.  During our minutes, days, weeks of training having running buddies meant having others that encouraged and convinced that it was possible to keep going.  Sometimes through words and other times it was simply their presence that kept each of us running.  When we are by ourselves, deep in the dark Blair Witch woods, it’s easy to let up a little or just stop to walk. Not so much when there are other F3 Pax around.

In a world where it is all about the guy on top or, in runner’s parlance, being defined by the time on the watch the F3 Sandhills Pax showed that it ultimately isn’t all about that. We ran alongside one another, we talked, we shared, we embraced at each Exchange Zone and wished one another well.  As YHC crossed the finish line with Caffey, McFly, Mel and Sprocket I was struck by having a “great cloud of witnesses” which reminded me what extraordinary friends each of us in the F3 Sandhills have.  As we circled up in the BOM and Captain D prayed us out we allowed others to see a brand of faith that is not in the pews but an active faith that isn’t afraid to show itself in public and YHC is damned proud of being a part of this group!!